When you book with an account, you will be able to track your payment status, track the confirmation and you can also rate the tour after you finished the tour.
Sign Up
Price
0

Ace Hiking presents an exclusive trekking destination to hidden areas of Tsum Valley known as the Valley of Happiness in local language as well as in Tibetan which is close distance to the border of Tibet. On this Tsum Valley trekking, you will be surrounded by awesome high peaks of Mt. Manaslu, in the shade of gigantic Ganesh Himal which is the closest mountains within Tsum Valley.

Tsum valley opened for trekkers just 2 decades ago, and less frequented by travelers due to its remoteness and still a virgin and pristine country unspoiled and untouched by modernized world, where you can explore its ancient cultures as it was for past hundreds of years.

The people of Tsum close related to neighboring tribes of Manaslu and Manang tribes with strong hold of Tibetan culture, religion and way of life, as it is lies close to the border of South West Tibet, just a mere distance from Mu Gompa (monastery)

Tsum Valley adventure begins with a long interesting drive towards warmer region of Gorkha district at Arughat and then starts wonderful trek on the main Manaslu route for few days and then away from mainstream trail heading to the hidden areas of Tsum Valley on the northern side of massive Ganesh Himal range of mountains.

Around Tsum valley exploring its old medieval like villages enriched with Buddhist and ancient Bon culture including visit of interesting Mu Gompa and Rachen Gompa.

After an amazing time around remote and isolated Tsum Valley in perfect wilderness, our return journey leads downhill following Budhi Gandaki River all the way to lower areas of Gorkha district for the drive back to Kathmandu with best services and management of Ace Hiking guides and staff.

Welcome to Nepal Himalaya, we meet in Kathmandu airport and will be transferred to your hotel. Ace Hiking offers welcome dinner in authentic Nepalese restaurant.

Kathmandu valley sightseeing tour will start after breakfast. We will visit four UNESCO world heritage sites. Heritage site tour includes the Pashupatinath temple, Boudha Stupa, Swoyambhu stupa and Kathmandu Durbar Square. You will get opportunity to obsearve historical, religious and cultural aspect of Nepal. You will also see Nepalese architecture containing palaces, buildings, temples, Stupas, carving, mason and metal work; after an interesting sightseeing back to the hotel, preparation for the trip to Tsum Valley trekking.

Starting this wonderful trekking to Tsum valley with an interesting and exciting drive following the busy main highway along the Trisuli River, and leaving the main road our route heads across the river to mid hill town of Dhadingbesi, and then on the dirt track for few hours reaching warmer sub tropical area near Budhi Gandaki river at Arughat bazaar.
From Arughat village which is slowly developing into a town, continue drive on rough road following Budhi Gandaki River upstream most of the way near to its source on this trip, leading through many farm fields and villages with fantastic views of Ganesh II at 7,118 m, Ganesh IV 7,104 meters. Then reaching level ground continue following Budhi Gandaki river to reach Arkhet village, from here an hour climb brings at Soti Khola a small village for overnight stop with simple and basic lodge for overnight stop.

After a nice stop in this small village, today’s walk starts with a descent to reach the river side with small tea shops around, walk on the nice paved stone steps to cross Nauli Khola (stream) overlooking at waterfalls and then coming at Khanigaon a small village then walking on the gradual path to cross another bridge to reach our overnight stop at Machha Khola, a small farm village by the stream where fishing is popular here as the name of this village called Machha khola meaning fishing stream.

From here leaving the warmer to little cooler area as the morning walk continues following the Budhi Gandaki river upstream passing many small villages with Khorla Beshi, after few breaks in between walk carries on the winding trail to reach Tatopani a place with hot spring as the name of this place Tatopani meaning hot water because of the natural hot springs located in the midst of a forest, after a nice stop walk leads passing few villages of Dovan and Yaruphants, by the river Budhi Gandaki after crossing a bridge with a short climb to our overnight halt at Jagat village a moderate size and populated village with nice typical Nepali style houses with great number of shops and lodges.

From Jagat, morning walk leads to higher areas passing scattered farm villages with short climb and downhill to cross over a bridge to reach at Naget and Philim, a large village with spread-out farm houses. After Philim walk through farm terraces of golden fields of wheat’s and barley, then a climb on rocky ridge top into bamboo forest area to our overnight stop at Lakuwa on leaving the main trail of Manaslu trekking route.

After Lakuwa village and leaving the Budhi Gandkai River for a week, our walk heads towards Tsum valley into the valley of happiness, as our route enters narrow gorge then with short descend and uphill climb into rhododendron and pine tree forest walking past small farm villages then climbing above Lungwa Khola to reach at Chumling village for first overnight in Tsum Valley.

From here altitude slowly gains with the mountain views of Ganesh Himal peaks, as the villages and landscapes looks similar to Tibetan windswept plateau. Morning walks with downhill to cross a bridge over small river, with views of Ganesh Himal also known as Yangra at 7,422 m high, walk slowly leads at Chokhan-paro village for overnight stop.

After Chokan-paro heading closer at upper Tsum area to Nele (Ne-lay) starting with a climb onto open valley and windswept country with few small trees that survives around this arid terrain.
Walk continues uphill with views of Ganesh and Manaslu Himal, after a pleasant walk reach at Nele on the way with visit to an old cave of 11th Centaury Saint Milereppa famous and popular among Buddhist as poet, singer, tantric guru his folk-tales and songs are still remembered by Tibetans and Buddhist alike.

Morning walk starts on reaching the highest point at Mu Gompa and main destination of this adventure, as the walk continues to climb on high arid terrain offering views of high peaks on the way to Mu Gompa for overnight stop.

Rest with free day at Mu Gompa to visit villages and interesting old Mu Gompa with ancient antique scrolls, statue and relics this is one of the most important monastery of Tsum and Manaslu area.

Today our last day at Tsum valley, as the morning walk leads to a long descend to Chumling village passing farm areas and then back into tree lines, after a long downhill walk of 6 hours reaching at Chumling village for last overnight stop around Tsum.

From Chumling village, morning walk downhill following river downstream with views of waterfalls then reaching villages of Samba, Tingding Chhupyang till our walk ends at Philim village for overnight stop.
This is a nice farm village with school supported by Japanese (as Mt. Manaslu was first climbed by Japanese so this area is a favorite among Japanese)

From here onwards on warmer area with paddy fields, after a breakfast walk leads to Tatopani following Buri Gandaki River through several small villages of Nagjet, Sidibas Bazaar and Jagat. Walk further descends at Yaruphant, then to lower area with dramatic change in vegetation, finally ending six hours walk to our overnight stop at Tatopani a small farm village with hot spring as Tatopani in Nepali means ‘hot water’, afternoon enjoy the hot springs and relax. The local believes that the spring water have a natural power to cure various disease and wounds.

After a nice time at Tatopani and hot spring, morning walk leads to Soti Khola walking along the Budhi Gandaki River downstream, after hours of good walk reaching at Gurung village of Labubesi, from here walk further through terraced fields and waterfalls to reach our last overnight stop at Soti Khola.

Day 17Drive back to Kathmandu via Arughat - 7 hrs

With enjoyable overnight at Soti Khola village, our last day on the mid hills of Mid West Himalaya morning taking vehicle for long interesting overland ride to Kathmandu following Burigandaki River downstream heading towards Arughat which is the last village of Gorkha area. From drive continues to Kathmandu passing through Dhading then on the good road most of the way to reach at Kathmandu, after a fascinating trip Tsum -The Valley of Happiness trekking.

After a great memorable time in Nepal Himalaya and perfect experience with Ace Hiking, depart from the hotel to the airport for final departure homeward bound or to respective destinations. 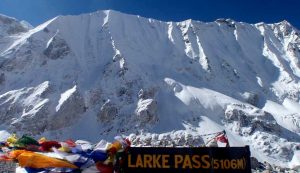