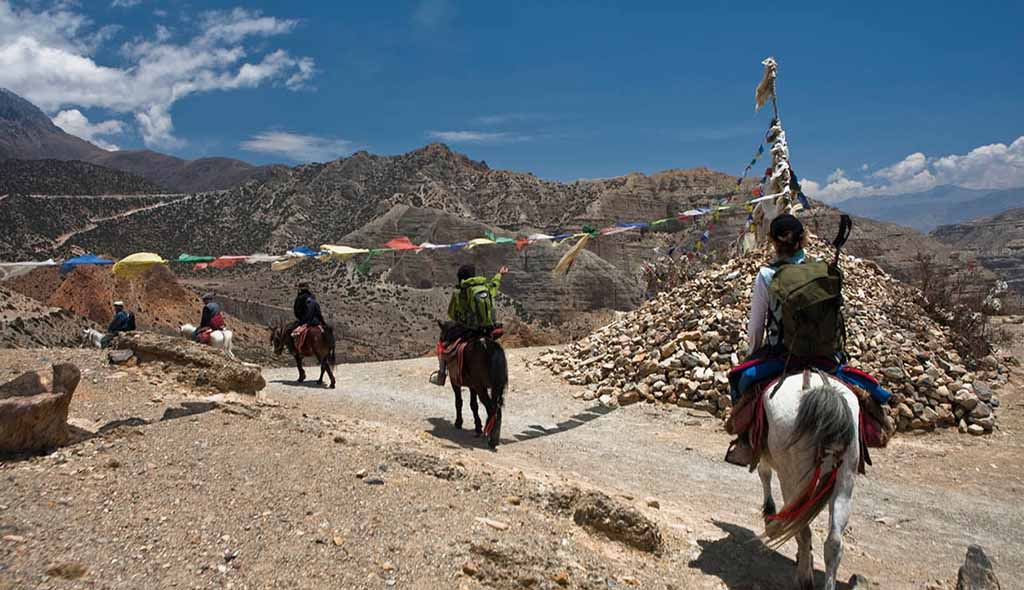 In the heart of the Nepal Himalayas, Mustang is a heritage of natural beauty, wildlife, history and culture in timeless harmony. Mustang lies in Nepal as a repository of Tibetan Buddhist shrines and Monasteries.

The northern Mustang reaches up through the Himalayan ranges to the Tibetan plateau. The Kaligandaki River flows southern down to the hill beneath lofty snow – clad peaks creating a deepest gorge in the world. The most of the terrain and forbidding hills allow ancient cultures to flourish in a pristine form as they have occupied for over thousands of year.

The upper part of Mustang is a special zone and was opened to foreigners only in 1992. Foreigners entering must have guide from a registered Nepalese agency. Upper Mustang visitors should be underlining to respect the natural landscape, people, culture and heritage. Upper Mustang is an area that historically has been highly influenced by Tibet and, indeed, shares much of its culture, language and religion with its northern neighbor.

Geologically the Mustang is one of the most dynamic part on the planet. About 40 million years ago, Mustang was under the Tethys Sea and was submerged into water. It was located at the southern edge of one of the continents called Laurasia. Then, approximately 40 million years ago, the sub-continent crashed into the south coast of Laurasia causing an uplift of land formed the middle hills and the greatest mountain range, the Himalaya. This old sea still shows signs of itself in the sea shells and fossils that are dotted throughout the region on the valley floor, as well as on the hills and ridges. Fossils are called Shaligrams by Hindus to be holy as a form of the God, Vishnu; the protector God in Hinduism.

The heart of Mustang for both upper and lower is the Kaligandaki River. This River, locally called the Thak Khola in lower Mustang and the Tsang-Po in upper Mustang, is considered holy river in Mustang. It flows from the Tibetan plateau, cutting through the Himalaya and ends up flowing into the Gangas River of Northern India. The fact that it cuts through the mountains shows that it existed long before the mountains and created the river valley as the mountains grew up around it. As it flows between the Annapurna (8,091 meters) and Dhaulagiri (8,167 meters) massifs, the Kaligandaki forms the deepest river valley in the world.

Mustang comprises important habitats of rare and endangered fauna ranging from subtropical to alpine zones. The Diverse geography of Mustang provides a home for large number of animal and bird species, including the snow leopard, musk deer and Tibetan Argali, Golden Eagle, Himalayan Griffon and Lammergeyer. The forests and high altitude pasture of Mustang district is home to 29 species of mammals, including the endangered Snow Leopard and highly valued Musk deer, Kiang and Tibetan gazelle. Over 211 species of birds, of which 48% are the breeding residents of this area, inhabit mustang. Approximately 30,000 Demoiselle Cranes and over 40 bird species fly over the Kaligandki valley during the fall migration, Demoiselle Cranes sometime settle in the buckwheat form in bad weather conditions. The Tibetan Sandgrous (Syrrhaptes Tibetan), a rare bird, found only in Mustang district of Nepal. Ghasa area is an important destination for the pheasant. This is the only known area in Nepal where all six pheasant species are found. There does exist at least a few of globally threatened Cheer Pheasant. The other pheasants found around Ghasa are Blood Pheasant, Koklass, kalis and Himalayan Monal. The vicinity of Ghasa is the best known site in the Annapurna Conservation Area for the globally threatened Wood Snipe also known as Nepal Wren Babbler.

Although upper and lower Mustang followed different courses in history, they still share a lot in terms of social systems, landscape and beliefs. The houses and inns themselves are made in traditional flat mud roof style with wood for cooking and worshipping and top floor is for sleeping. Grandfather to grandchildren live together as a single family at the single home. In Upper Mustang, polyandry, or one woman marrying two or more husband is still practiced although it is declining. The settlements are usually formed on the valley and are formed in dense clusters of houses, interspersed with narrow road. Almost in every village, they set up a monastery. Tiji, Lhosar, Saka Lugka and Duk Chu are main festivals of Mustang’s inhabitants.

If you are interested to know more about religion, culture, mythology, and ancient arts then you must visit Mustang.