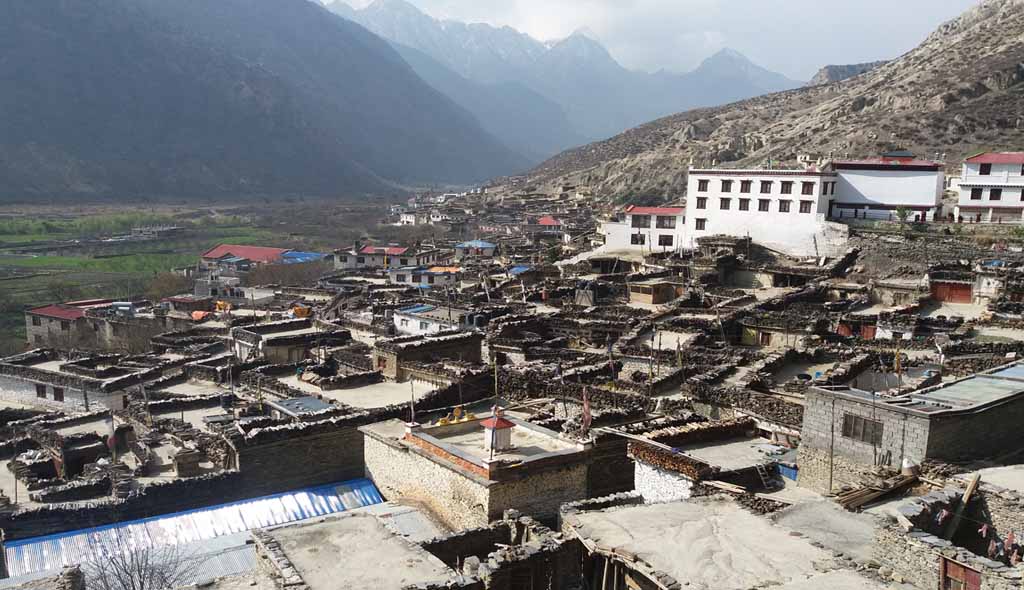 Marpha is one of the most famous village of Panch Gaun (Five village) region in Mustang district lying on Annapurna Circuit Trek rout of Nepal. It is famous for its picturesque appearance and most importantly for its apple orchards and apple products. It lies in the Trans – Himalayan rain shadow zone and therefore stays more or less untouched by raging monsoon of lower ranges. The village is mostly inhabited by Thakalis (Mawatan) representing four district clans: Lalchan(Ruby), Hirachan (Diamond), Jwarchan (Jewel) and Pannachan (Emerald). Its economy is strongly dependent upon agriculture, livestock, tourism and labor in foreign countries.

The village is characterized by traditional flat mud roofed house with piles of firewood neatly stacked upon it. Wooden carved windows, long main spotless flagstones, and paved alleys are some of unique feature of Marpha. It is worth visiting small library at center of the village or horticulture farm on southern end of it.

This is monastery of Karma-Pa sect located at center of the village. The monastery was build more than 200 years ago. Being an offshoot of Karma-Pa Kagyut-Pa sect foundation of Sam teling of Mustang. It is also known as Samteling Gompa of Marpha. The Monastry depicts images of Amitabha (Red Buddha), Chenresig (Avalikiteswora), Channa Dhorje (Vajrapani) and Guru Rimpoche (Padmasambhab) along with other deities and beautiful frescoes. Visitor might encounter Dhekep, a masked dance performed by monks in October/November.

This is home of Adam Naring, the headman of Marpha where Ekai Kawaguchi, Japanese monk, stayed for three months in 1900on this way to Tibet via Dolpo. Ekai Kawaguichi studied sacred texts of kangyur and Tengyur in the chapel of this house during his stay here.

It was established by government in 1966. This farm is a pioneering in horticulture development (especially apple) in Mustang. All major temperate fruit trees are available in the farm, thus helping to conserve more than 45 varieties of apple collected from major apple growing countries. The main activities of the center are research, production, training, and out-reach programs for temperate fruit and vegetable crops. It also has fruit processing unit including brandy distillery.

Other attraction in Marpha

The main attraction of Marpha is numerous beautiful apple orchards. Harvesting time is September. There are three distilleries producing famous apple, peach and apricot brandy and German technology apple dryers (one in big scale) A pleasant walk in the field and the village gives an insight of traditional village life. Women are seen in traditional fashion like Nhakun Chulo, Tutum with jewelry during the festival and social events.