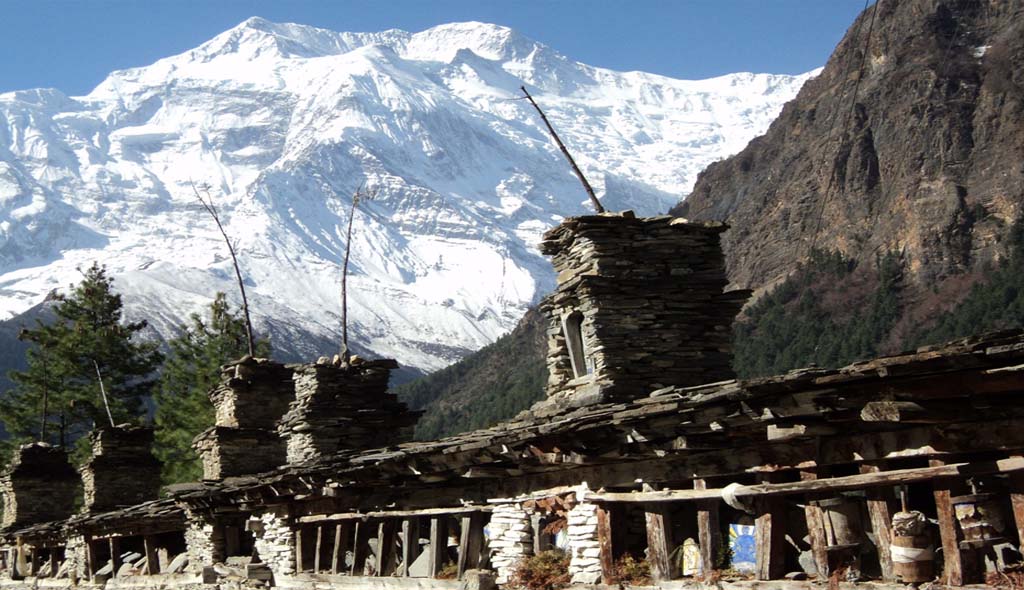 Manang is rich in natural beauty and cultural heritage in Annapurna region. It is situated in the wide valley of the Marshyangdi River to north of the Annapurna mountain range. Annapurna Circuit trek or also known as Thorong La pass trek leads through the Manang Village. Most of the people take rest day to acclimatize in Manang village before crossing on Thorong La pass (5,416 meter / 17,769 ft).

The upper valley of Manang district, known locally as Nyesang, extends 20 km from Pisang (3,200 m) to Khangsar (3,730 m) and lies at an average elevation of 3,500 m. The inhabitants known as Nyesangpa or more popularly Manangi are said to have migrated from Tengur in Tibet and have settled the area for some hundreds of years. The population of Nyesang also includes Ghale, Gurung and immigrant Tibetan people, although the culture and traditions of the area are strongly motivated by Lama Buddhist practices, evidenced by the streaming prayer flags and Mani walls as well as the many Gompa of the area (the oldest of which predate the 14th century). Traditionally the people of the region have been great traders, a fact certified by royal warrant in 1984 during the region of Gorkha King. Since that time Manang people have been involved in trading herbs, animal product and other local commodities on the national and international stage. With the decline in urban opportunity and local development of the tourism industry, many Manangi families have moved their enterprises back to Nyesang with particular in hotels, restaurants and shops catering to the tourist trade. Although tourism has become increasingly important to the prosperity of the region, agriculture remains the basic of the local economy and way of life. Barley, Wheat, Buckwheat and Potato are the main crops, which are harvested once a year (March-November). The Nyesang valley also forms important pasture land for grazing yaks, cows, goats, sheep and horse.

Gyalsomdo is the southern part of Manang district, extending from Tal to Chame, situated in Marshyandi gorge. The people of the region are mostly Gurung, followers of pre- Buddhist Bonpo religious tradition. However, Ghale, Lama, Gurung, Ghotiya, Kami and immigrant Tibetan people have made home in Gyalsomdo. In the past, Gyalsomdo was an important center for the salt trade crossing Larke Pass.  Today, the local economy is dependent on agriculture, livestock, wage labor and tourism.

The Nar Phoo region is the northernmost area of Manang district bordering China (Tibet) and comprising the very important in this physical isolated region, and like the Nyesang the people of Nar Phoo are strong adherents to Lamaist Buddhist.

Location: Situated at the gateway of Manang district from Lamjung district on the Annapurna Circuit Trekking trail.

Special feature: A relaxing, peaceful small town at the gateway of Manang district. Tal is home to a beautiful waterfall that flows all year round.

Special feature – Water remains hot all year round for a rejuvenating natural shower or to ease those aching muscles after a long days hiking.

Location: Between Bratang and Pisang on the trekking route.

Special feature: traditional village, situated high on the hillside, with some of the most spectacular view of all of Annapurna.

Special feature: This historic Buddhist Gompa is typical of the district and a testament to a traditional culture of more than 500 years.

Special feature: Manang is a charming village with all facilities of home. There are many places for day hiking to the surrounding hills to enable you to acclimatize and enjoy the spectacular culture and natural beauty of the area.

Special feature: The view of Annapurna range and natural beauty of the lake are magnificent as is a walk in yak pasture and habitat for snow leopard.

Location: 3 days from Manang on the Khangsar / Tilicho trail.

Special feature: A trip to the highest lake in the world (4,900 m) is a good way to acclimatize with good views of Tilicho peak and surrounding valley. On the way up you pass Tare Gompa, one of the oldest monastery (500 years in the district).

Location: 3-4 hours hiking from Manang village on the trekking rout of Annapurna Circuit.